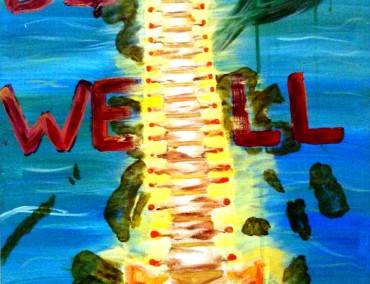 They say a picture is worth a thousand words, well in this case, it’s worth so much more!

Brandie had a dream about a painting that she was supposed to paint for our trip before we left the USA. She painted a picture of a spine with the words “Be Well.” She felt it was supposed to be very specific, with all the vertebrae and discs, etc… She felt it would be a very important part of our trip! She was right!

She worked on it as she had time, all the way up to a few minutes before she gave it away here in the Philippines. She painted a map of the Philippines surrounding the spine, and wrote the words “Be Well.” She thought initially it would be for a young child whose spine God wanted to heal… Then we met “the doc.” She said as soon as he had said two words, she knew the painting was for him. She gave him the piece of art and proceeded to prophesy over him saying God was going to use him as a “Backbone of the Philippines” and that his heart was that all people would “Be Well” among other words of prophecy. He was blown away! When we met with him later, he kept asking, “How did you know this was for me?” “When did you know you were supposed to give this to me?”

As it turns out, this man is one of the top surgeons in the Philippines. He has great influence in the country. We got to spend several hours with him and long story short…he has provided us with a house, a car, and a caretaker for a very great price! Thank you God! He is so faithful! You cannot out-give God!

Also check out our monthly E-Newsletters