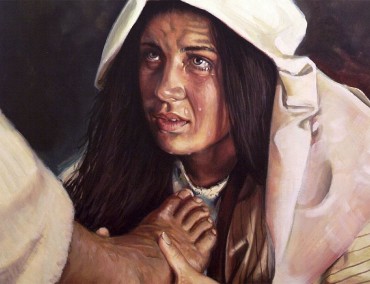 Walking the dark streets the next night, the hunt for God’s treasures continued. We searched, every corner, every step, waiting to find the next one. Then I (Brandie) saw a group of them. My heart would not let me pass them. I introduced myself along with my interpreters. I was overcome by the need to just be with them. There they were….some under 18. They are prostitutes. They smiled and laughed as I struck up small talk. Then, I asked boldly, “Do you like this work?” Suddenly their facial expressions changed, smiles drifted away, and their body language slumped. One by one they told me that they are ashamed of what they do. They told me story after story of their dangerous nightlife. They shared of how they make good money to send home to support their families, and of the abuse they endure to get such rewards. One lady in particular said that she is regularly beaten up. All of them said that they have had men hold guns to their heads and they, in turn, were forced to do things against their will. Their dignity, piece by piece, was torn away. Of the group of 5 I encountered, 2 were about 4-5 months pregnant.  Another lady shared how she was tied up, beaten, raped, and mistreated by a “customer.”  Don’t they know that they are more precious than any amount of money they would ever get? Don’t they know that they were born to change their world?? One by one, I began to tell them how God sees them. I prophesied hope and destiny with specific words for each one. One gal began to weep as I spoke life into and over her.

Then I asked if she had pain in her body. She said that she was having difficulty getting rid of a cough that she had for several weeks. I asked if I could pray for her. A midst all of the other girls, I laid hands on her. I invited heaven to come into her body. The cough left. She said that she felt good… really good. She said that she was “feeling very light.”  She then asked if I would pray for her sinuses. God’s presence came and she laughed and smiled. She said that she felt “woozy.”  They didn’t realize how dry and thirsty they were. You could tangibly sense their thirst as they began to drink from the Water of Life. Smiles came back to their beautiful faces. Hope came to them. God’s presence was strong. All of the young ladies felt God’s presence and were touched right where they were at. No need to clean up who they were for the King of Kings to love them. He wanted to meet them on the street. Where ever He goes, His Kingdom is also.

We were headed back to leave to go home when we saw a girl who matched the clues we had written earlier. She was with a group of girls and a man (who we presumed to be their pimp). We felt like God not only wanted to touch them, but that the man needed physical healing as well. As we approached them, the pimp didn’t see us and left and walked across the street. We began praying for two ladies. One woman was healed of arthritis pain in her knees! A few minutes later, while praying for these two ladies, the pimp came back. He approached me (Josh) and said “What is she doing?” speaking of Brandie. I said, “Her knees just got healed, all the pain is gone.” “Do you have any pain in your body?”

He was so amazed! Later, God also healed the arthritis in his hips, lower back and body. All the pain left! He was so happy! I talked with him about Jesus and how much he is loved by His Father in heaven. He smiled and thanked us as we moved on.

When the King shows up, His entire Kingdom accompanies Him. In His Kingdom there is no sickness or disease, so there shouldn’t be any here either. After all, it was Jesus who taught us to pray, “…Your Kingdom come, Your will be done, on earth, as it is in heaven.”