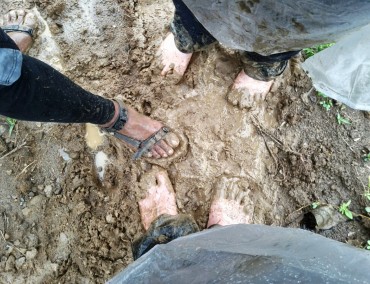 The (impossible) Journey – Part I

When we first heard about this trip, we both felt we were supposed to go. Shortly after this, we heard that it was too dangerous for Americans to go due to rebel forces in the area. As soon as I heard this, my initial reaction was, “OK, we just won’t go then.” But then Holy Spirit stopped me and asked, “Are you going to let fear decide for you, or me?” It was then that I knew we were going!

The day arrived. It was 3 am. We loaded up into the back of two army trucks and headed out before the sun came up. I knew this journey was going to be a difficult one, but I had no idea just how hard. This trip was one of the most physically, mentally, emotionally challenging things I have ever done in my life!

Brandie & I had done mountain climbing and hiking in the past, so I wasn’t super concerned about the hike. I knew that we were going to be hiking for about 9 hours. What I didn’t know is that I would be hiking for about 8 of those hours barefoot! This changed everything! Once the rain and mud set into my sandals, my sandals failed me completely. After slipping and falling down several hills. I gave in and took off my shoes and began to walk barefoot down the muddy trails. Traction was a little better, but we were still falling and sliding down the hills. At one point, we decided it would be better to sit down and slide down the muddy hills than to fall down them. We were laughing and taking pictures of our muddy feet. We were having a good time. It was fun being barefoot in the mud… for about 30 minutes. Then it started to hurt. There were rocks and painful stickers and who knows what else. After several hours, I was in so much pain that I wanted to quit, but I had to keep going. My feet were cut and bruised and they hurt so bad! I took one slow, painful, step at a time. I wanted many times to give up, but I didn’t. In fact, to be honest, the only reason I didn’t quit or give up is because it was not an option. I was in the middle of nowhere. I could not turn back. I could not stop. I knew that there was no other option, but to keep going, to press through the pain and keep going. Every step had to be taken with great care. I was so intently focused on where to take each step that I rarely took time to look up or look around at the incredible beauty surrounding me. I was so focused on the ground and the pain, it was easy to forget I was in the middle of one of the most beautiful places on the planet! It reminded me of where they filmed Lord of the Rings movies! We crossed over two muddy rivers, stopping to cool off and clean off the mud at each one as best we could. About 8 hours later we reached the final river to cross. There it was… I saw this village on the other side of this raging river. I could not believe how happy I felt. I had made it.

All I had to do was rest and gather enough strength to swim across this river and I was done! It took every last ounce of energy in my body to swim across the river. We started upstream from the village. We began to swim as hard and fast as we could. We didn’t make it. Our bodies were too weak, too tired. The current was too strong. Then our rescuer came. He was an older Filipino man maybe in his 50s or 60s and he was less than half of my size, but he was so strong! Brandie and I were unable to stand on our own under the power of the river’s current. Not only did this man stand in the current, he grabbed my hand and Brandie’s hand and proceeded to pull the three of us across the river towards the shore to safety. Wow! Thank you Jesus!

I was spent. I was exhausted. And yet, I was so relieved. That feeling you get when you realize that you have done what you thought was impossible… And then, that feeling you get when your guide tells you, “Only 30 more minutes to go!” I was in a state of shock! I cannot do this. I have nothing left. Long story short… I made it. 🙂 The journey that began at 3am was now over at 6pm! We would soon learn that it was all worth it to see what God was going to do through us in that place.